EVENTS > The Scarlet Letter | The Outsiders 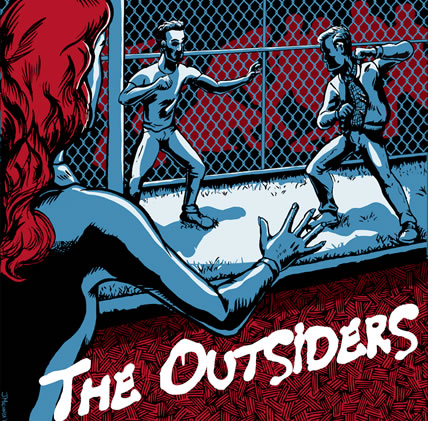 A stage play written by Christopher Sergel based upon the novel by S. E. Hinton
Directed by Scott P. Calhoon 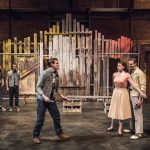 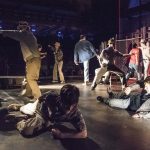 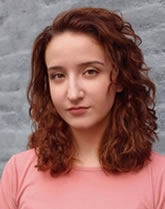 Ariel Squire (Marsha/Ensemble) is thrilled to be making her Prime Stage Theatre debut! A Pittsburgh native, Ariel grew up performing as a student at Pittsburgh Creative and Performing Arts and Pittsburgh Musical Theater--where she later interned for two summers and found her love of working with children. Recent credits include The Adventures of Nate the Great and The House of Bernarda Alba-Pittsburgh Playhouse; The Tragedies of Othello and Two Gentlemen of Verona-New Renaissance Theater Company; and directing Does This Woman Have a Name? and Tina at the Raymond Laine Memorial One Acts Festival. Up next, she will be assistant directing Prime Stage’s production of Mockingbird. Ariel will be graduating from Point Park University in April with a BA in Theatre Arts with concentrations in acting and directing. She would like to thank her family for their love and support, Scott for this amazing opportunity, and Mel, Emmeline, and Nadia for keeping her sane and always giggling.Instagram: @ariel.squire 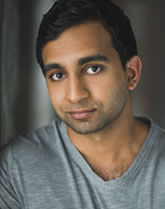 Arjun Kumar (Steve) is thrilled to be making his debut with Prime Stage Theatre. Arjun has performed with many theater companies in the Pittsburgh area, and some of his favorite shows include Arcadia with Little Lake Theater, Sherlock Holmes and the Speckled Band, with Kinetic Theatre, Stage Kiss with South Park Theater and Ubu Roi with Throughline Theatre. His next show will be Amadeus with Little Lake Theatre. When not on stage, Arjun works as a software developer, and spends lots of time with his puppy, Waldo.

Carolyn Jerz (Cherry Valance) is thrilled to return to Prime Stage Theatre after playing Viola in Twelfth Night last season! She has performed with PICT Classic Theatre (Jane Eyre; The Merchant of Venice; Oliver Twist; and Great Expectations) and St. Vincent Summer Theatre (Beauty & the Beast). Other roles include Maria (West Side Story), Luisa (The Fantasticks), Maggie (A Chorus Line), Mary Warren (The Crucible), Puck (A Midsummer Night’s Dream), and the Dew Drop Fairy in the Westmoreland Symphony Orchestra’s 25th Anniversary Nutcracker ballet. She has won PPT’s Shakespeare Monologue Contest three times, and shares in a Guinness World Record entry for Fastest Musical Production (Stage Right’s Children of Eden, 14-1/2hrs from start to curtain-time). She has also starred in grant-winning shows that raised awareness of pediatric cancer and of teen depression. Off-stage, Carolyn studies theater and dance at Seton Hill University, as well as Health Science, for which she is completing an internship in physical therapy. Next up: See her in April as the Yellow Peril in PICT’s Da. Headshot Photo Credit: Kelly Tunney. 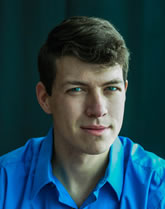 Cole Vecchio (Dallas) is a Pittsburgh based actor excited to be making his Prime Stage Theatre debut! He has a B.A. in Theatre-Acting from Slippery Rock University. Past roles include: Father Flynn (Doubt, a Parable); Romeo (Romeo & Juliet); Benedick (Much Ado About Nothing); Ebenezer Scrooge (A Christmas Carol); Pastor Manders (Ghosts); Kyle (Hungry Jane), performed at the Edinburg Fringe Festival; Kit, a role he originated in the world premiere of December Things; Matt (Pen); and Cassius (Julius Caesar). Cole has also been an actor at the Pittsburgh Renaissance Faire for the last two years as ranger Nathaniel Halt. Cole would like to thank director Scott Calhoon, this awesome cast, his acting coach Robyne Parrish, Darrin for being the best friend/brother ever, Rachel for being the best girlfriend ever, and Mom, Dad, Casey, Chance, and Teddy for their constant love and support. He would like to dedicate his performance to his grandfather, John Mann. 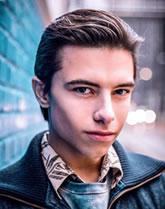 Dakoda Hutton (Johnny Cade) is thrilled to be making his Prime Stage Theatre debut in The Outsiders. A few of his favorite past credits include The Outsiders (Ponyboy), An Ideal Husband (Vicomte De Nanjac, Phipps, u/s Lord Goring), The Three Musketeers (Duke of Buckingham, Cardinal’s Man, u/s Athos), Ragtime (Immigrant Ensemble, Fight Captain), You Can’t Take It With You (Mr. DePinna), The Crucible (Judge Hathorne, u/s Reverend Parris), and Fight Choreographer for The One Act Festival (16-17) at the Lincoln Park Performing Arts Center. Dakoda would like to thank everyone who made this production happen, and he hopes that you enjoy the show!

Domenic Jungling (Two-Bit) is beyond excited to be making his debut with Prime Stage Theatre. Recent theater credits include Chicago Penn State New Kensington; The Goodbye Girl, Last of the Boys Theater Factory; and currently Dom is working with Pittsburgh CLO's Gallery of Heroes tour Pioneers of Flight. SAG Short Film credit: The Color of Sound Loud Color Productions, LLC. Domenic also has appeared in numerous local and statewide commercials. Dom graduated from Seton Hill University with a B.A in Theatre. He would like to thank his friends and family for loving him unconditionally and putting up with him and his ridiculous amount of energy. He wouldn't be here without them all. One Heartbeat, Mazzocco Team. Enjoy the show!

Dominic Raymond (Ponyboy) is a junior theater major at Lincoln Park Performing Arts Charter School. His most recent credits at Lincoln Park include Matilda (Mr. Wormwood), Clue (Wadsworth) and The Three Musketeers (Athos). Dominic has also worked with New Works Festival in Charlotte’s Revival (Tommy), Shadowbox Players in The Breakfast Club and The Lamp in All Shook Up (Dean). He has also performed at The Theater Factory, Geyer Performing Arts Center, and Little Lake Theater for many local shows. He has trained at CMU’s drama pre-college, Los Angeles acting workshops, Pittsburgh CLO Academy, The Second City in Chicago and Broadway Artist Alliance in New York. 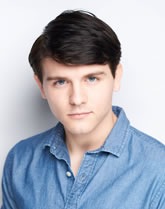 Josh Lowman (David, Paramedic) is excited to be performing in his very first production. Josh is a graduate of Central Catholic High School and a National Honors Society student, who has trained with private acting coach Daina Griffith for over two years. He started working straight out of high school as a helper at a beer wholesaler in Lawrenceville, where he still works part time. Josh is thankful for the love and support of his friends and family through his journey as an actor, and hopes to make them proud in his very first show. 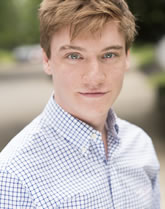 Kyle DePasquale (Randy) is so excited to be back with Prime Stage Theatre after his recent performance as Arthur Dimmesdale in The Scarlet Letter. He is a Pittsburgh native and a graduate from Westminster College. Some of his notable performances include Cabaret (Emcee), Romeo and Juliet (Romeo), Our Town (George), A Midsummer Night’s Dream (Lysander), Drowsy Chaperone (Robert Martin), and Hamlet (Hamlet). Kyle was an apprentice at Commonwealth Shakespeare Company in Boston performing Henry IV Part 1 (Hotspur), and he attended The Stella Adler Studio of Acting's Shakespeare intensive in New York. 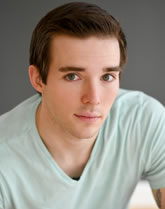 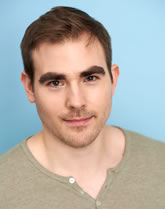 Michael Barnett (Darry) is thrilled to once again work with the Prime Stage Theatre. Michael returned to acting in 2016 thanks to the teaching and support of the wonderful Pittsburgh acting community. He is known for the role of The Leader in the Non-State Actor's Ravages of Now, Tigger in Rage of the Stage's Winnie the Pooh and the Seven Deadly Sins, and playing The General in Throughline Theater Company’s Andre. When not in acting classes or trying to perfect a line, he can be found hunched over a computer reading opinions or trying to deadlift a small truck.

Nathaniel Yost (Paul /Ensemble) is returning for his second appearance with Prime Stage Theatre. The first time as Carlson in Of Mice and Men. He graduated from Duquesne University with majors in Theatre Arts and Theology. Nathaniel's past roles include Death of a Salesman (Happy Loman); A Midsummer Night's Dream (King Oberon); Avenue Q (Brian); the titular role in Macbeth; Beauty and the Beast (Ensemble/Beast u/s ) St. Vincent Summer Theatre; A Funny Thing Happened on the Way to the Forum (Pseudolus) Apple Hill Playhouse; Bubble Boy: The Musical (Jimmy) Arcade Comedy Theater’s first musical; and most recently Harold Hill in The Music Man at The Heritage Players.

Noah Welter (Bob) is elated to be appearing as Bob in Prime Stage Theatre's The Outsiders. He received his Bachelor of Arts degree in Communication Studies with a minor in Theatre from Slippery Rock University of Pennsylvania in 2018. Some of his other notable performances include Bubble Boy the Musical (Mark) Arcade Comedy Theatre; Heathers the Musical (Kurt) Slippery Rock University; Bellmouth Crossing(C) Pittsburgh Cultural Trust’s First Night Celebration; and Jesus Christ Superstar(Apostle)-Red Barn Players Instagram: noah_welter 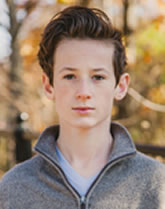 William Sendera (Wayne/Ensemble) is thrilled to be returning to Prime Stage Theatre after previous roles as Jonas in The Giver and Tobias in The Strange Case of Dr. Jekyll & Mr. Hyde! Other Pittsburgh stage credits include Newsies (Leo) PCLO; Oliver Twist (Oliver) PICT; Three Days in the Country (Kolya) Kinetic Theater; Ragtime (Edgar) CMU; ensemble roles in Brigadoon, Gypsy and Mary Poppins PCLO. Previous Austin TX credits include The Who's Tommy (Young Tommy), Seussical Jr (JoJo), Pinocchio (Pinocchio), A Christmas Story (Schwartz), and Les Miserables (Gavroche), all at the ZACH Theatre as well as Merrily We Roll Along (Frank Jr.) at St. Edward's University. Will also originated the role of Bobby Jr. in a workshop of ZM, a new musical by Kotis/Hollmann, the team that created Urinetown. Will is a student at Central Catholic High School.