In the Time of the Butterflies

In the Time of the
Butterflies

Presented with the NEA Big Read, which is a program of the National Endowment for the Arts in partnership with Arts Midwest.

ARTICLE: Regional Premiere at Prime Stage Theatre Features Point Park University Alumni and Students
ARTICLE: Julia Alvarez on why her novel In the Time of Butterflies is still vita

"Julia Alvarez' novel is as lovely as a butterfly at rest, and as moving as one in flight.” ~ Burlington Free Press.

Experience the spirit, passions and courageous acts of the Mirabal sisters - "The Butterflies" - as they inspired a fight for freedom in the Dominican Republic. Their legacy led to the UN creating the International Day for the Elimination of Violence against Women. 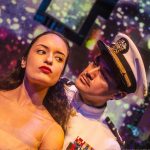 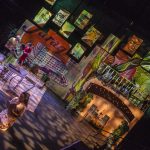 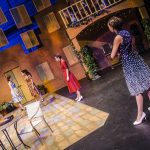 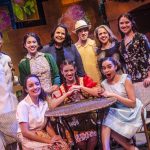 Víctor M. Aponte (Lio) Víctor is ecstatic to be making his Prime Stage debut and to be performing with such a talented cast. He received a BFA in Theatre from Clarion University in 2011. Since then he's worked locally with Pittsburgh Musical Theatre, Pittsburgh CLO, Asylum Entertainment, Mariposa Theatre for Young Audiences and Throughline Theatre Company. Víctor would like to thank Ricardo and the incredibly talented team at Prime Stage for this wonderful opportunity. It’s truly a privilege to get to tell this story. So much gratitude is owed to his family, friends, and mentors for their endless support. Lastly, he would like to dedicate this run to his mother, Luz Cosme. She’s living the embodiment of what the Mirabal Sisters represent. 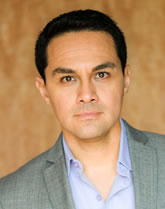 Enrique Bazán (Trujillo) Enrique is proud to collaborate with Prime Stage, Ms. Minou Tavárez Mirabal, and all who have made this Pittsburgh premier of Butterflies a very special occasion. He was last seen as Matthew in Jesus Christ Superstar at The Strand Theater (2018), and in Cahoots at South Park Theatre (2017). Enrique has been performing in the Pittsburgh area for over 30 years. In 2014, he originated the role of Christian in the musical A Pirate’s Tale with Shadows & Flames Productions. With Prime Stage, Enrique’s last production was Treasure Island (2002) where he played the roles of Blind Pew and Ben Gunn. Favorite roles include Chino in West Side Story, Demetrius in A Midsummer Night’s Dream, Juan Duarte in Evita (Pittsburgh Musical Theater), Devil in Las Manos de Dios, and Bobby in Los Invasores, which was the first play in Pittsburgh to be fully produced, promoted and presented in Spanish. Enrique holds engineering and business degrees from the University of Pittsburgh and he is a proud member of SAG-AFTRA. Love to his parents, his wife Gabriela, and his brothers and sisters around the world. Siempre vivas en su jardín.

Susana Garcia-Barragan (Older Dede) Susana is thrilled to be part of the cast of In the Time of the Butterflies, a story that, as a Hispanic woman, she feels honored to be able to represent. This is her debut with Prime Stage and she would like to thank Ricardo (Director) for this wonderful opportunity. Some of Susana’s most memorable parts have been: Narrator, Fred’s Wife, Tiny Tim and Ghost of Christmas Yet to Come in Steel City Shakespeare’s production of A Christmas Carol; Balthasar, Friar Francis, Borrachio and Music Director in Throughline Theatre’s stage reading of Much Ado About Nothing; Lucius and Pindarus in Julius Caesar, also for Throughline Theatre. She has also been in musicals playing the parts of Tanya in Mamma Mia, Trix in Drowsy Chaperone, Demeter in Cats, Mary Magdalene in Jesus Christ Superstar, Mrs. Bedwin in Oliver, Mayzie La Bird in Seussical, Tituba in The Crucible, Gabriella in Boeing Boeing, Narrator in Joseph and The Amazing Technicolor Dreamcoat, and Maria in West Side Story. Special thanks to her wonderful husband and beautiful daughter for their unconditional support with all of her endeavors, specially her obsession with theatre. 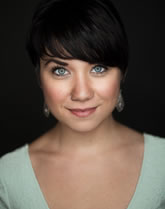 Lydia Gibson (American Woman) Lydia is an actor, singer and teaching artist residing in Pittsburgh, PA. She graduated from Indiana University of Pennsylvania with her B.A. in Theater and is now a touring actor and teacher for Saltworks Theatre Company, and Audience Development Coordinator for 12 Peers Theatre. Some of Lydia’s previous credits include Susie in Wit (Iron Horse Theatre), Ava in Blue Rendevouz (12 Peers Theatre’s Mythburgh), and Mark Antony in Julius Caesar (Throughline Theatre Company), as well as various film work in short films and commercials. This is Lydia’s first performance with Prime Stage and she could not be more honored to be involved in sharing such an important story.

Evelyn Hernandez (Minerva) Evelyn is absolutely delighted to be making her Prime Stage debut as the revolutionary Minerva Mirabal in In the Time of The Butterflies. Graduating cum laude with a Bachelor of Arts Degree specializing in theater from Point Park University in 2016, some of her favorite credits include guest starring on NBC Universal’s Gone, Point Park University’s Midsummer Night’s Dream, and entertaining children of all ages as Disney princesses at local parties and events. In her spare time, she enjoys being a bilingual voice actor and singer for several online projects, dubs, and podcasts. As a proud Dominican, Evelyn is ecstatic to help bring this truly powerful story to life and represent her roots in the city of Pittsburgh. She gives love and thanks to God, her family, her friends, and the whole cast and the crew of In the Time of The Butterflies for this momentous experience.

Krystal Rivera (Patria) Krystal is currently a Senior Performance and Practices major with a concentration in Acting and a Musical Theatre minor at Point Park University. She was most recently seen as Jasmine in Pipeline at City Theatre. You may have also seen her as Amelia in The House of Bernarda Alba at Point Park University's Pittsburgh Playhouse. She is very grateful for this opportunity to work with such an incredible cast and crew. A special thank you to Ricardo for letting her be part of telling such an important story about the Mirabal Sisters and Dominican Republic. She also wants to thank her family and friends for always supporting her when it comes to achieving her dreams. “Dominicano soy ,de mis raíces yo no voy a olvidarme.” 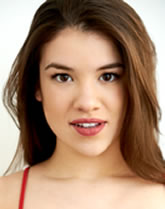 Frances Tirado (Mate) Frances spent the past summer in Vieques, Puerto Rico. She spent weekends learning merengue, bachata, and salsa, and spent weekdays volunteering and writing. This past fall, she performed as Saint Christina in The Blanket’s production of excerpts from Saint Ursula and the 11,000 Virgins choreographed by Christopher Williams. She has choreographed select pieces for Pitt Stages, the Pitt Dance Ensemble, and full musicals for the Pitt Musical Theatre Club, Red Eye, and Heritage High School’s Drama Department in Leesburg, VA. Growing up, she trained at the Loudoun School of Ballet and attended summer intensives at the Washington Ballet. Last spring, Frances worked as the PBT ambassador for Pitt. Frances is in her senior year at the University of Pittsburgh where she is studying nonfiction writing and theater, and dancing, generally, whenever she hears music play. 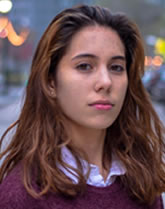 Vanessa Vivas (Younger Dede) Vanessa is endlessly honored to be making her professional debut telling the timely Mirabal sisters' story, one that resonates deeply and inspires her astronomically as a Venezuelan citizen. She is a sophomore theatre arts major at Point Park University. Past credits include Does This Woman Have A Name? at the Raymond Laine One Acts Festival, Pinnacle Productions' Mysterious Skin, Bring Me to Light as well as Point Blank Presents and Point Blank Live! She extends her gratitude to Ricardo, her friends-turned-family in Pittsburgh, her loving and supportive parents, y el resto de la familia por su puesto. Es para ustedes.

You will experience the spirit, passions and courageous acts of the Mirabal sisters - "The Butterflies" - as they inspired a fight for freedom in the Dominican Republic. Their legacy led to the UN creating the International Day for the Elimination of Violence against Women held each year.

The inspiration of playwright, Caridad Svich
Given that the story is based on fact, there is, for me, a profound debt to the lives of these real women and their legacy. My task was to re-re-invent the beautiful, willful and sad story of these vibrant and complicated women in a heightened theatrical frame as the surviving sister carries the memories inside her and the family history for generations.

The result is a memory piece inside a memory piece, a story inside many layers of stories, a play directed by the motion of butterflies that flutter and land, and rise and fall, leaving their incandescent beauty behind.

I offer In the Time of the Butterflies to the Mirabal Sisters and the people of the Dominican Republic, to Julia Alvarez and the inspiration her delicate, passionate prose has given me to create my own work, and to the audience, the public that makes theatre community, and reminds practitioners that what we do in this politics of art is always call for action: a call to move society forward.
This play is for the Mirabal sisters and their families.

Prime Stage is honored to have Ms. Minou Tavárez Mirabal join us for the opening weekend.