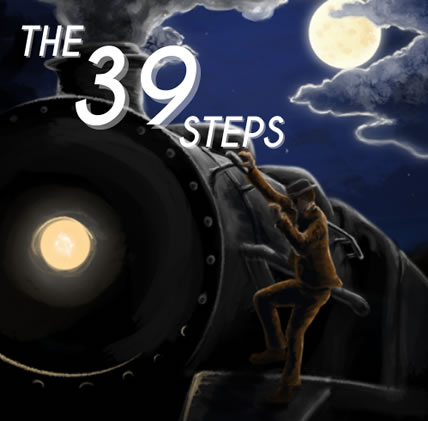 Based on the novel by John Buchan
Adapted by Patrick Barlow

Hannay, a man, trapped in a boring life, encounters a woman who claims to be a spy. Soon, she is murdered and he gets entangled in a nationwide manhunt. Hitchcock’s suspenseful thriller becomes a fast-paced spy experience with intrigue and nonstop laughs as four actors bring 150 zany characters to life!

Special Dates
Preview: Friday, May 5th at 8pm - Pay What You Can

The 39 Steps was a British suspense film, released in 1935, that helped establish Alfred Hitchcock as one of the leading directors in the genre and employed themes that became hallmarks of his movies.

Alfred Joseph Hitchcock was born in London, England, on August 13, 1899, and was raised by strict, Catholic parents. He described his childhood as lonely and sheltered, partly due to his obesity. He once said that he was sent by his father to the local police station with a note asking the officer to lock him away for 10 minutes as punishment for behaving badly. He also remarked that his mother would force him to stand at the foot of her bed for several hours as punishment (a scene alluded to in his film Psycho).

Hitchcock attended the Jesuit school St. Ignatius College before going on to attend the University of London, taking art courses. He eventually obtained a job as a draftsman and advertising designer for the cable company Henley’s. It was while working at Henley’s that he began to write, submitting short articles for the in-house publication. From his very first piece, he employed themes of false accusations, conflicted emotions and twist endings with impressive skill.

In 1920, Hitchcock entered the film industry with a full-time position at the Famous Players-Lasky Company designing title cards for silent films. Within a few years, he was working as an assistant director. In 1925, Hitchcock directed his first film and began making the “thrillers” for which he became known the world over. His 1929 film Blackmail is said to be the first British “talkie.” In the 1930s, he directed such classic suspense films as “The Man Who Knew Too Much” (1934) and “The 39 Steps” (1935). In 1939, Hitchcock left England for Hollywood. The first film he made in the United States, “Rebecca” (1940), won an Academy Award for best picture. Some of his most famous films include “Psycho” (1960), “The Birds” (1963) and “Marnie” (1964).

His cameo appearances in his own films, as well as his interviews, film trailers and the television program “Alfred Hitchcock Presents” (1955-1965), made him a cultural icon. Hitchcock directed more than 50 feature films in a career spanning six decades. He received the American Film Institute’s Life Achievement Award in 1979. (biography.com)

Besides marking the beginning of Hitchcock’s international notoriety, The 39 Steps is contains so many “Hitchcockian” elements before that was an established description. The tropes of the innocent, random man drawn into a nefarious plot, the icy blonde, the thriller with pops of cheeky humor and romance, the “MacGuffin,” and the visually stunning, slightly sideways style all appear in this film. Some elements can seem cliched now, but that’s only because this movie did it first! You can see why it’s a popular film for those searching for the auteur’s mark.

The 39 Steps is more than just “interesting.” It’s also really fun and quirky, plus it has some striking images and performances.